How Not To Order Nasi Kandor: The ‘don’ts’ of eating in Penang 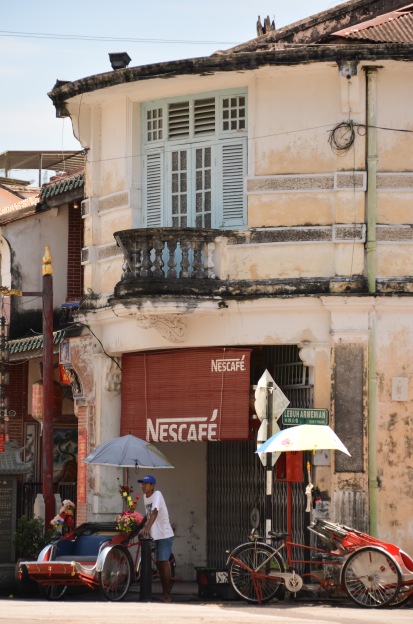 Malaysia is famous for having a vibrant and exciting food scene, and Penang in particular is abundant with amazing restaurants and food stands. Whilst the sheer quantity is amazing it is also overwhelming and can be terrifying when faced with new and exotic food when you have absolutely no idea whatsoever what it is. Here is how I dealt with the situation. Don’t follow my lead….
Don’t wait until there is a huge queue behind to realise you have no idea what anything is or how to order.
‘I wish I could have filmed that’, my friend said to me as we finally sat down with two reasonably good looking plates of food in front of us. ‘Yeah’, I replied, ‘A lesson in how not to order food’. We had been directed to Nasi Kandor Beratur a highly popular late night food stand in Penang. Now Nasi Kandor, for the un initiated is a sort of buffet on rice (nasi)  in which a selection of various dishes is displayed in a counter for you to chose and add to your rice. I was feeling pretty confident, regaling tales of eating the very similar Nasi Kampur in Indonesia and remembering the ease with which I had pointed at the food which seemed most appealing.  At 10pm the lights went on in the food counter and a small woop erupted from the eager crowd, the queue now curling around the tables, encompassing the entire seating area and trailing off down the street beyond. As people began to move forward I realised to my horror that there was no pointing. The man behind the counter appeared in a tiny sliver of space between the food and the wall and expected you to lean across and name what it was you wanted. Assuming of course that you knew what it was you wanted. What followed almost constituted a disaster and I only ended up with dinner by panicking and just saying things which sounded like food for instance ‘chicken’ and ‘egg’. 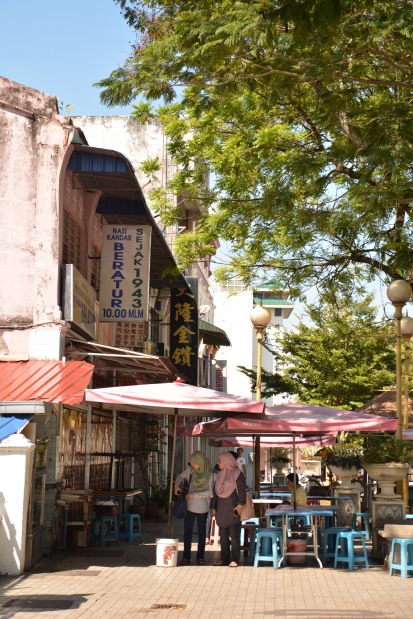 Don’t bother with menus
There is a great deal of very good Indian food in Penang and I eagerly perused the menu before ordering a masala dosa. ‘No, no dosa’. ‘Er ok roti canai?’ ‘No, no roti.’ In the end we asked for the tandoori chicken plate that everyone in the restaurant seemed to be eating and that was met with the affirmative. Lesson learnt, it is much more reliable to look at what everyone else is eating, or what they are cooking than rely on menus.
Don’t expect anything to be what you assume
With street food eats it is easy, when everything is battered, for things to be disguised. Sometimes  it is nice to check just so as to not be completely thrown off guard. For instance ordering the fried banana I had grown so fond of to find out that this time it was cheese came as a bit of a shock. Equally biting into a kebab which I had been assured was ‘vegetable’ and finding it tasted rather fishy (literally) was not the most pleasant experience. That said, after the initial shock neither was unpleasant, so for my last tip….

Don’t worry
Just go with it, all of the food in Penang is amazing so as long as you end up with something on your plate chances are you will enjoy it.