Things to do in Kuching

There are two things which are pointed out to you as you arrive in Kuching. One, as the capital city of Sarawak is its proximity to Borneo. The second is the importance of cats. Kuching is the cat city, which is why a 15ft statue of a waving cat sits in front of the archway beckoning you in. Having a cat themed trip in Kuching is perfectly possible, but the city offers a great many other treats.

As Kuching is a gateway to Malaysian Borneo, it is usual for people to be lured this way by the promise of exotic plants and animals, including Orangutans. By far the easiest way to see them in this area is by visiting the Semenggoh rehabilitation centre. First established in 1975, the centre is now home to a number of semi wild Orangutans who have been reintroduced into the natural reserve.  The K6 bus from the main bus station costs 4rm each way and takes about an hour. The bus leaves every few hours throughout the day but its best to get the 7am one to get to Semenggoh in time for the 9 o’clock feed. If you’re in any doubt, its the one with all the tourists on it. 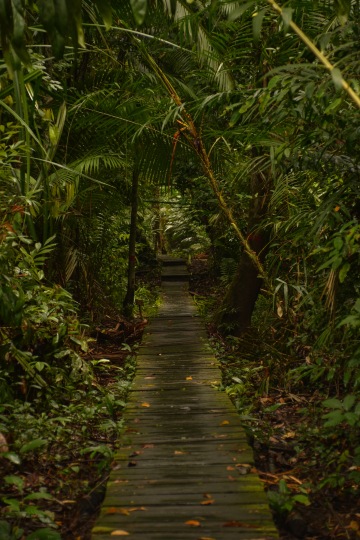 Another bus ride from Kuching, (and a short boat trip) is Bako National Park. Home to a vast range of wildlife and vegetation, Bako is another unforgettable Borneo experience. The red number 1 bus stops outside the Islamic Museum on the main bazaar and costs 3.50rm each way. This will take you to the jetty where you hop on the boat which is a bit more costly at 40rm return. The last boat back is at around 3:30pm so be sure to go early if you are doing a day trip. Alternatively, book to stay over in the national park for as little as 15rm for a bed in a dorm. If you stay over you get to walk around the park when its a much quieter and can also join the night walks, spotting many tiny, luminous frogs, kingfishers, flying foxes and glow in the dark mushrooms. The rooms do not provide blankets so be sure to bring something for the night, and watch out for the monkeys who will be dying to get their hands on any food you leave out.

Malaysia is world famous for its cuisine and although Penang is considered the foodie city, Kuching is a great place to get stuck in yourself. The city is quieter and means that lessons are less expensive and much more personal. I spent an afternoon cooking laksa with a Malaysian woman I had met in a café who runs cooking classes out of her own home. Relaxed and informal, this is a chance to get in touch with local culture, and of course eat delicious food.

Most hostels in Kuching will give you a map highlighting a number of landmarks as well as street art and statues throughout the city. A 6km loop at its longest, it is completely feasible to do a walking tour of the city and take in many museums, temples and eye catching murals. Not forgetting the may feline homages dotted around Kuching. Alternatively companies such as Paradesa offer a cycling tour of the city.