Our Man in Havana: A Graham Greene Excursion

‘Wormold cooled his mouth with his morning Daiquiri’

Murderous police officers aside, Graham Greene’s depiction of Havana is comical and diverse. A city of dance halls, ostentatious hotels, spies, mafia style law enforcement and of course, rum. The hero of the tale, Wormold, feeds the British secret service tales of alcoholic pilots and high ranking engineers who are discovering the secrets of the island, in order to financially support his pious yet costly daughter. Although not intended as an image of impending doom, the novel was published in 1958, just one year before Castro took hold of the city of Havana. It certainly feels like a city on the brink, a sweaty, humid bubble ready to implode and go down in a swirl of daiquiris and salsa.

‘I am a British subject, my name is Wormold, my address Havana – Lamparilla 37.’

Sadly not based on a real life vacuum cleaner shop, number 37 Lamparilla street doesn’t actually exist. Stretching the length of Havana Viejo, this dusty street, now lined with rubble and potholes doesn’t seem to take its numbering too seriously. Frequently skipping many at a time you can only hazard a guess of whereabouts 37 would sit. The street itself is evocative enough to warrant a visit and to imagine what it would be like if somewhere along it’s never ending reach there was a shop selling vacuum cleaners.

‘He looked in at Sloppy Joe’s instead of at the Wonder Bar. No Havana resident ever went to Sloppy Joe’s because it was the rendezvous of tourists; but tourists were sadly reduced nowadays in number, for the presidents regime was creaking dangerously towards its end.’

Very much real is Sloppy Joe’s bar. The very bar in which Wormold is recruited for the secret service. Just off Jose Marti and Parque Central, the bar, which has recently been refurbished to replicate its 1950s heyday, is famous for other visitors such as John Wayne and Clark Gable.

‘perhaps a table at the Nacional- or would you say that wasn’t quite – well, suitable?’

The Hotel Nacional is a stunning and glamourous relic of old Cuba. It has played host to a vast number of iconic figures in its history as well a summit of mafia bosses and was immortalised by Coppola in the Godfather II. Wormold too visits the grand place, although decides to take Milly to the Tropicana instead as ‘it was a more innocent establishment than the Nacional’. Featuring a long driveway lined with palms and a large garden at the back giving views over Havana harbour and the seafront the hotel is a beautiful spot to visit, even if it is quite pricey to stay in.

‘The skyscrapers of the new town stood up ahead of them like icicles in the moonlight. A great H.H was stamped on the sky.’

In the novel Wormold spends a lot of time in the suburb of Vedado. Home to the rich and to Captain Segura, our terrifying police chief. As well as the Hotel Nacional, Vedado is home to a number of other large hotels including the Habana Libre which features in the novel as it was then; the Havana Hilton. A huge skyscraper with a restaurant on the 25th floor, the hotel offers some of the best views of the city. It was also where Fidel Castro holed up before he took over Havana and still echoes with the ghosts of powerful men and underground dealings akin to Captain Segura. 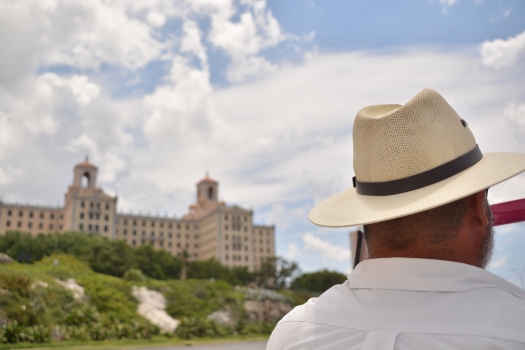 The Avenida de Maceo or The Malecon as it is now known, is what my taxi driver referred to as ‘the worlds longest sofa’. Running the length of the harbour from Vedado to the old town, this stretch is the bustling hub of Havana. In the day time home to fishermen and musicians or people milling around, the street comes alive at night. Barely an inch free on the wall, people line the sea front socialising and drinking out in the fresh air or walking in the same vein as Wormold and Beatrice.